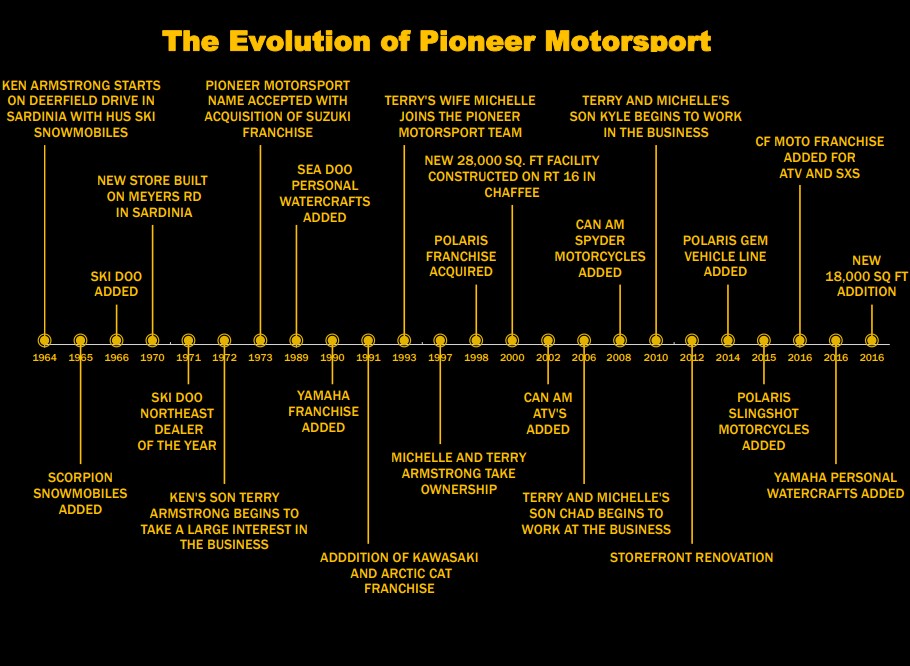 How do we stay small and sell big? It's simple: years of experience. At Pioneer Motorsport, our mission is to offer you the latest in parts and products at the best prices, and with unparalleled service. We pledge to use our best efforts to make your experience both beneficial and enjoyable. Once you give us a try, we’re sure you'll be back for more!

The Story Behind Pioneer Motorsport...

The history of the motorsport business that is now called Pioneer Motorsport dates back to the late 1960's. In 1964 Ken Armstrong decided to start a small business out of a garage next to his house on Deerfield Drive in Sardinia. Ken began his business selling Hus Ski snowmobiles, at this point it was himself, his wife and roughly 2 or 3 other employees. Two years passed and business was going well when in 1966 the Scorpion line became available. Ken felt confident is how business was going and decided to take on this venture. Things progressed quickly with this addition and before Ken knew it he was acquiring the Ski Doo line of snowmobiles. This was when things really began to take off as the little garage operation transformed into Ken Armstrong Ski Doo. At this point Ken's son Terry had started to show an interest in the business and worked alongside Ken. After having Ski Doo under his belt for a few years business continued to prosper. As a result Ken decided to build a facility on Myers Rd which happened to back right up to his current house and garage. In 1970 Ken Armstrong Ski Doo won the Dealer of the Year award for the Northeast region. The Ski Doo brand kept them busy for 3 years before another opportunity came about. In 1973 Ken Armstrong Ski Doo purchased a local Suzuki franchise in Yorkshire named Pioneer Motorsport, in which Ken decided to keep the name. The Suzuki brand was brought back to Sardinia and helped fill the space of the new showroom on Myers Road.

The business continued to stay steady and the number employees started to rise upwards to 10. In 1989 Ken was still fully involved but turned much responsibility over to Terry when the Sea Doo brand of personal watercrafts was added. Soon after Sea Doo was taken on the opportunity came to purchase a couple more local dealers, the Yamaha franchise was added in 1990 and a short year later Kawasaki was thrown into the mix. What had started with a couple Hus Ski snowmobiles in the garage had quickly turned into a multi line dealership offering customers some of the newest and best products in the industry.

In 1993 Terry's wife Michelle decided to forgo her restaurant career and join the family business as it really began to take off. She took over the main office duties while overlooking the three departments of Parts, Sales, and Service. In 1997 Michelle and Terry purchased the business from Ken and took 100% control. Not long after that the Polaris brand of ATV's was added. At this point showroom space was hard to find, the service department had outgrown their area, there was much more inventory in parts to account for, and clothing and apparel lines were also being represented. As a result of all of this more expansion was a necessity.

In 2000 Pioneer Motorsport broke ground on an all new facility on Rout 16 in Chaffee. At this point not only had Pioneer Motorsport expanded, but the manufacturers were introducing more and more product. The current showroom as vital to the success of the business as it not only gave more space but also moved the location from a dead end street to a heavily traveled road. In 2008 the Can Am Spyder brand of motorcycles was taken on and was and still is a great success. Today, there are 5 main brands represented in out showroom with each brand having different divisions. Bombardier Recreational Products (BRP) offers Ski Doo snowmobiles, Sea Doo watercraft, and their wheeled division of Can Am which is ATV's, Side by Sides, and Motorcycles. Kawasaki offers ATV's, side by sides, and motorcycles while Suzuki includes ATV's and motorcycles. Yamaha has ATV's, side by sides, motorcycles, and snowmobiles. And lastly Polaris has emerged with ATV's, side by sides, snowmobiles, and low speed electric vehicles.